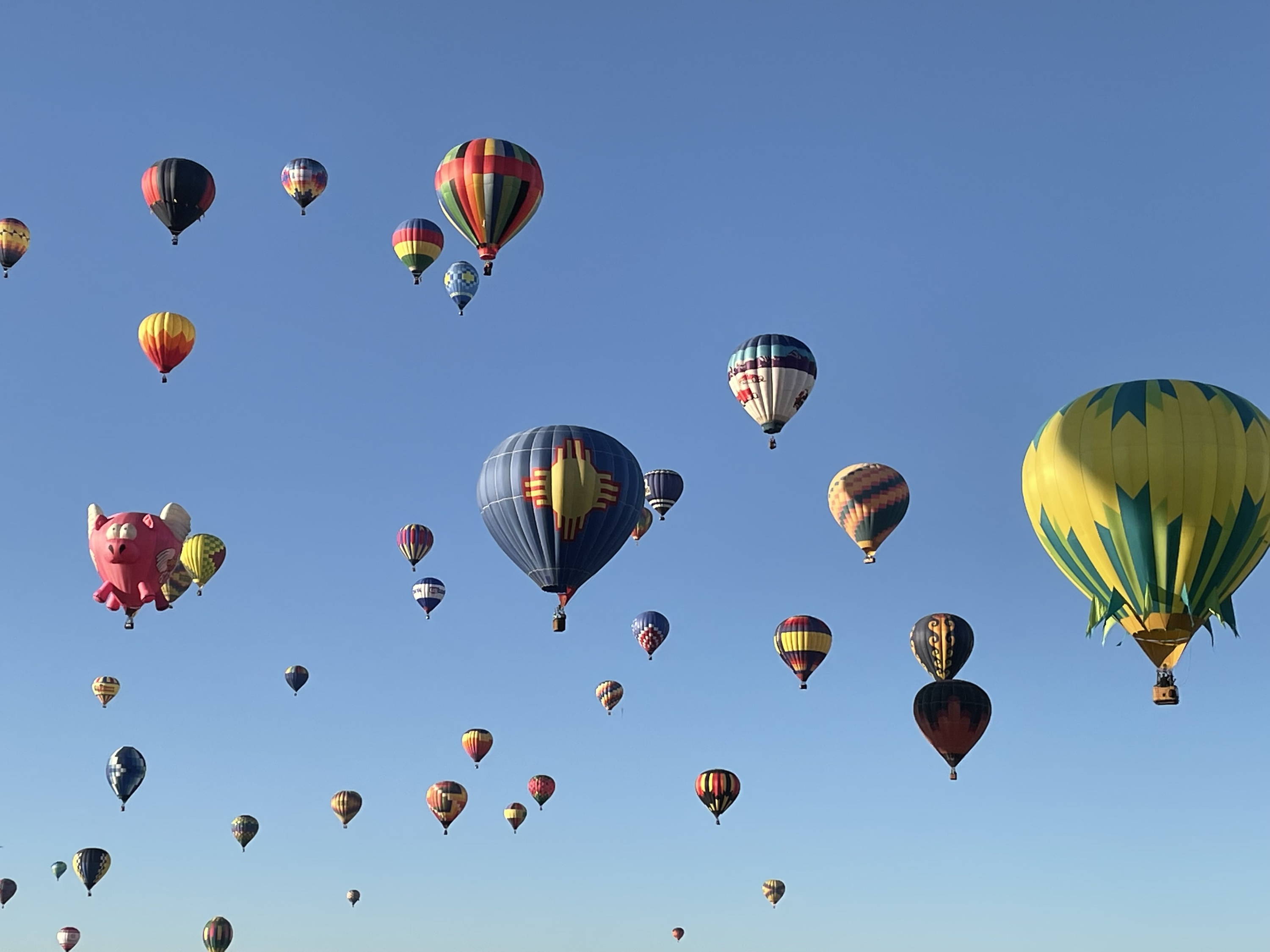 The largest hot air balloon festival in the world is held right here in the United States at the Albuquerque International Balloon Fiesta. This event has been a bucket list item of mine for the past 30 years and this year with my wife and daughter, I was able to knock it off my list. This was the 49th Balloon Fiesta held on October 2nd through October 10th. The Fiesta featured 588 balloons and 866,414 guests attended over the 9-day event.

We attended October 2nd, the initial day of the Fiesta. Our alarm went off at 3am, we were on our way to meet the bus to take us to Fiesta Park by 3:30am.

We got to the Cottonwood Mall to meet the bus in time for our pickup. We followed people we assumed were going to the Fiesta, (who else would be up at 4am), and kept walking towards where the buses were. When I say we followed ‘people’, I mean it was a mass of humanity, and we followed them to the end of the line to get on the bus. The line was massive, and people were dressed in winter coats, scarves, gloves. Of course, there I was in my shorts, a short-sleeve t-shirt and a sleeveless vest. As you can tell, I sometimes am not the brightest bulb on the marquee. 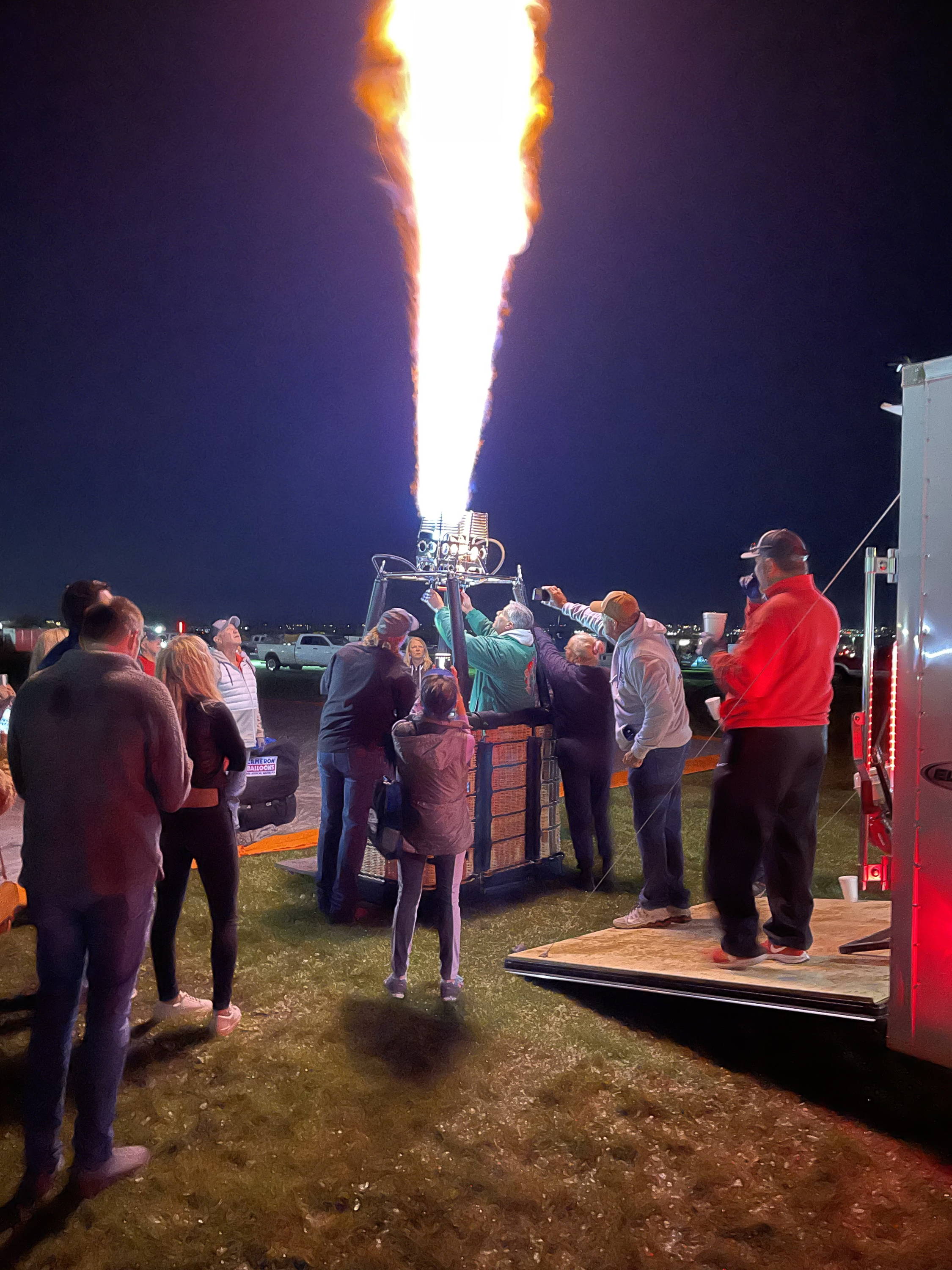 The first thing we noticed was how well this event was organized and the number of volunteers it must have taken to run this event. The line flowed quickly, seamlessly, and without issue. The trip took about 20 minutes to get to the park, and then another 5 minutes to get into the Fiesta itself.

It was now about 5am, dawn still was far off, but there was electricity in the air. The smell of food, and coffee was in the air. The merchandise tent vendors were jumping with activity. After chowing down on tasty breakfast burritos, we looked out on a pitch-black field and saw, well, nothing. We spotted a few local police and asked them where was the “best place” to see the balloons take off. The response was interesting……’anywhere’. Thinking this might be their first ‘rodeo’ here at the Fiesta, we then asked several groups of folks, (including folks wearing balloon hats). All responded similarly; “just walk out into the park and go anywhere”.

We proceeded into the dark abyss known as the park with our phone on flashlight mode. It was now 6 am and still no sign of a propane flame or a balloon. About 10 minutes later we saw the first flash of a flame, A BALLOON!!!!!! Like kids on Christmas Day, we trekked over (with a few hundred of our new closest friends) and watched as the first balloon was being prepared. This was one of the scout balloons that would go up before all the other balloons to help determine wind direction and speed at different altitudes.

Wait!!! Another blast of flame from a propane torch, then another, then another. At about this time we could see the first peeks of daylight coming above the hills. Excitement and anticipation were building, there was a palpable electric feeling in the air. Soon the scout balloons were inflated, and when they would turn on the propane torches to keep the hot air flowing into the balloons, the glow provided was awesomely beautiful.

Then we heard whistles blowing near the inflated illuminated balloons. The ‘zebras’ were clearing a path through the admiring crowd so the balloons could ascend. The ‘zebras’ were volunteers who would clear a path so the balloon basket would not hit anyone in the crowd as it took off. They are called zebras because most of them wear ‘referee’ shirts or actual zebra-striped tops. (this photo of a ‘zebra’ was obviously taken much later in the day!) 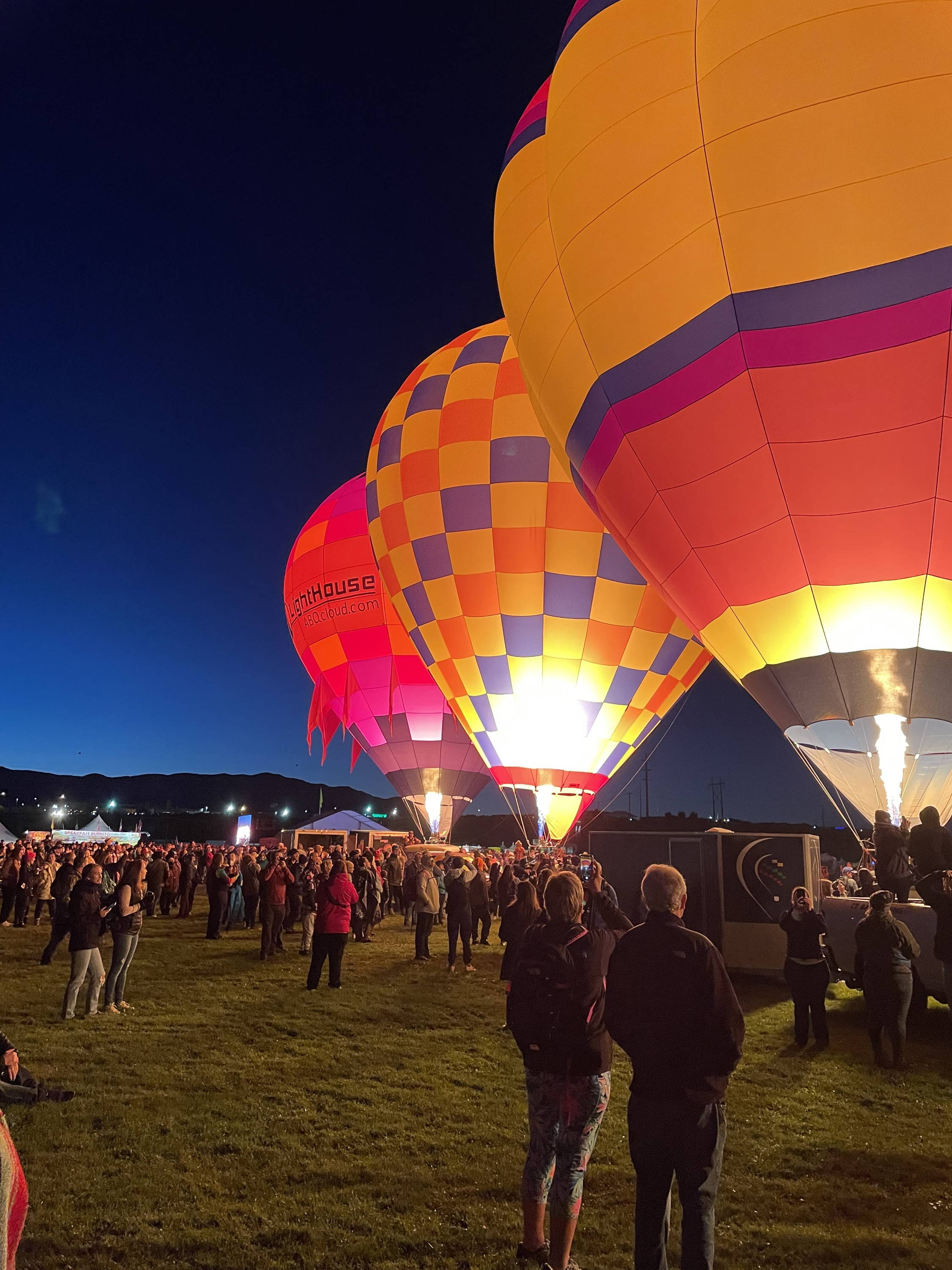 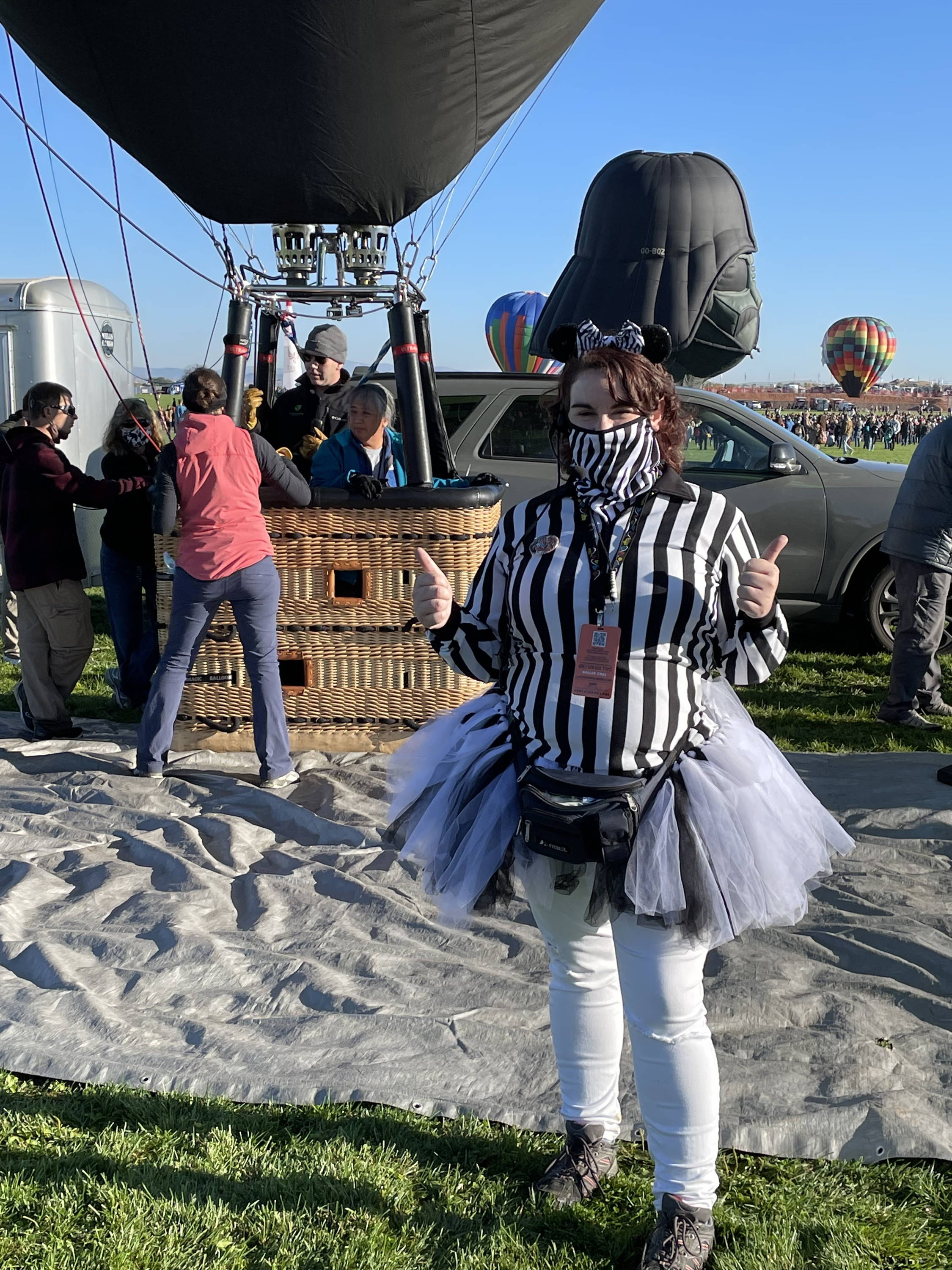 As the whistles blew the first scout balloon began to ascend, to a huge roar from the crowd. Then scout balloon 2, then 3, then 4 rose into the darkened sky, each to a thundering cheer. 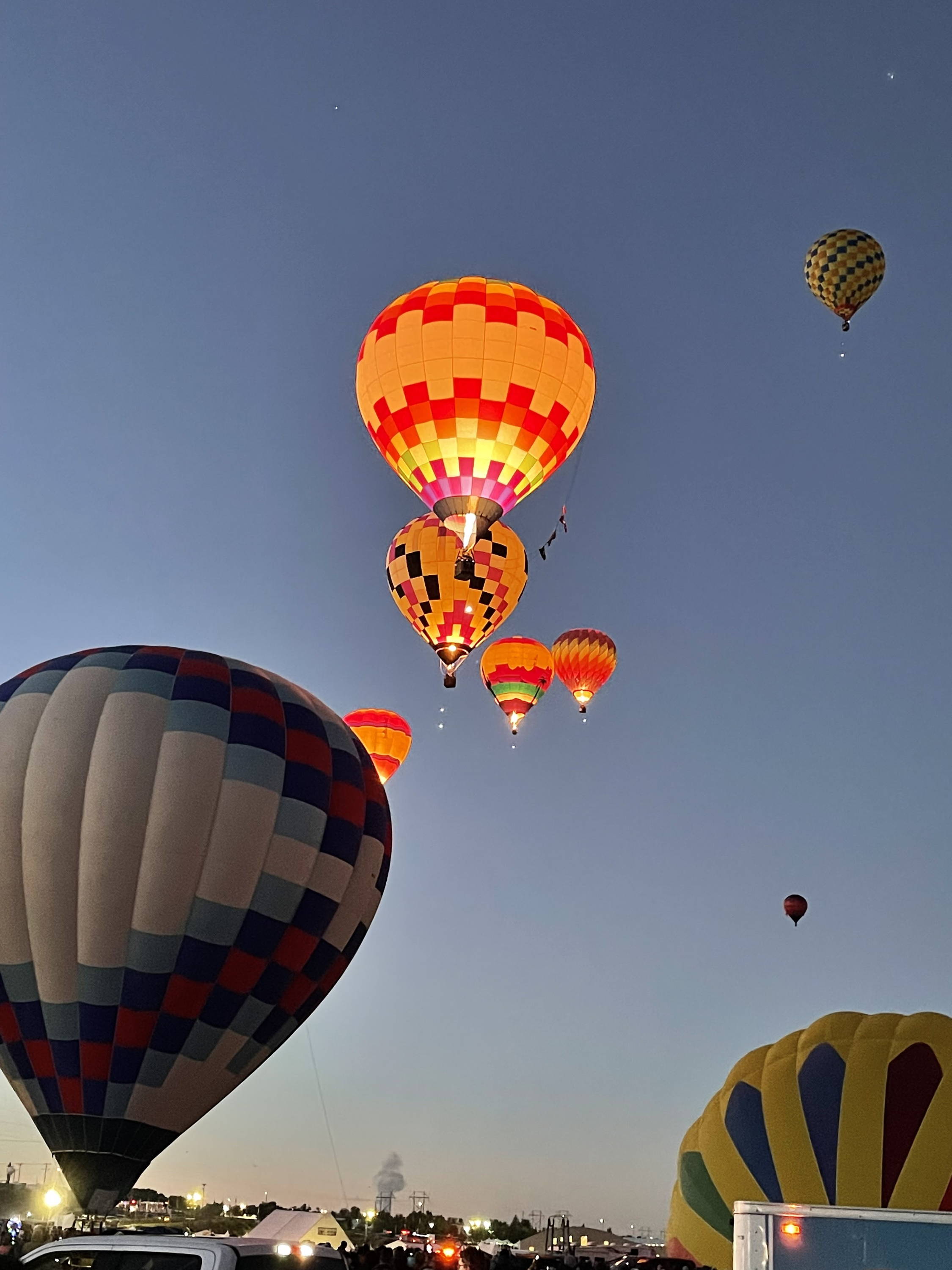 As each balloon was given a blast of fire into the balloons, it would brightly illuminate the dim early morning sky. As each scout balloon would fire their propane torch, then pause and fire again, the balloons seemed to be almost ‘twinkling’ as they rose high above the thrilled crowd.

Meanwhile, as the scout balloons were prepping and taking off, other trucks, and vans, trailing flatbeds were arriving, unloading, and starting to fire up their propane torches.

Between 4 to about 10 balloons would all be in a line, and each would start the inflation process.

There might have been 3 to 6 clusters all firing up at the same time in different areas of the park. Once each had been inflated then they waited for their ascension time. That is when the zebras with the whistles would begin blowing. One zebra for each balloon.

Around 7 am, the majesty of the ascension began. As the whistles blew, and the crowd stepped back, one by one they began to ascend. It was a breathtaking sight.

Once we figured out which way the wind was taking them, we would stand in a place where they would fly directly over us.

Or we would stand back and watch a group of 5 or 10 all take off in just a few minutes. This was occurring all over the park simultaneously. Each time a balloon left planet Earth, the crowd would cheer loudly and the folks in the baskets would pump their fists in approval.

There were striped balloons, checked balloons, fun balloons, advertiser balloons, you name it, it was flying high. The diversity of color, patterns, and even shapes were incredible. It was hard to take video and/or photos because so much was happening all at once. The launching continued for about two and a half hours. At times you would look up and it was hard to see the sky for the plethora of balloons. It was indeed awe-inspiring.

My daughter’s favorite balloon was Pigasus. That’s right, who says pigs can’t fly!!!! Pigasus was a massive pink pig with wings that was a show-stopper. My daughter seemed to feel like she was 3 again, not 25!!!!

There were so many other balloon characters were penguins, a buffalo, Yoda, the devil, Smokey the Bear, a cow, and so many more. There were balloons from different states like Colorado, and even from Maryland. There was a Darth Vader balloon head that was inflated, but alas did not take off. (I guess the Force was not with him on this day). 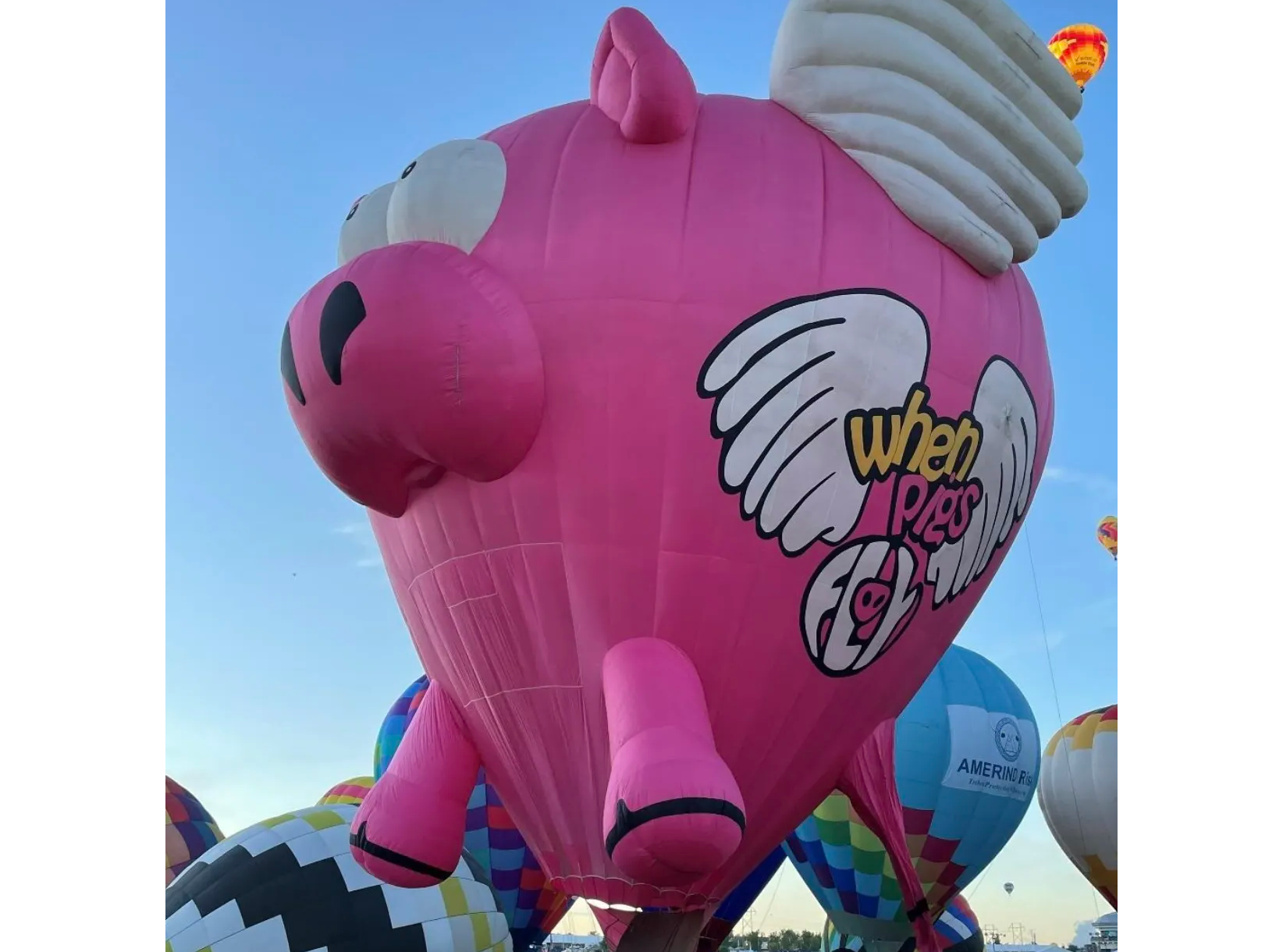 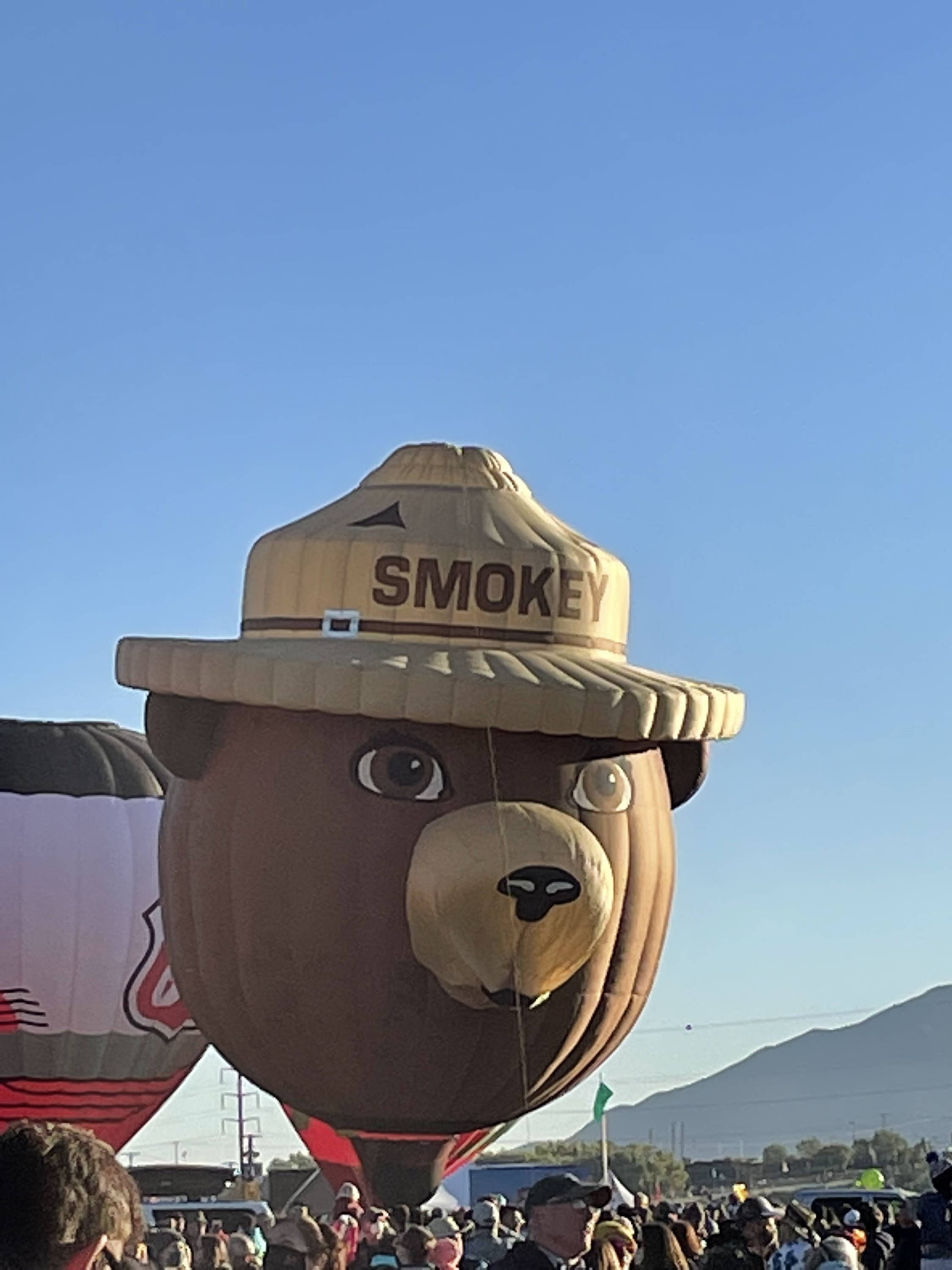 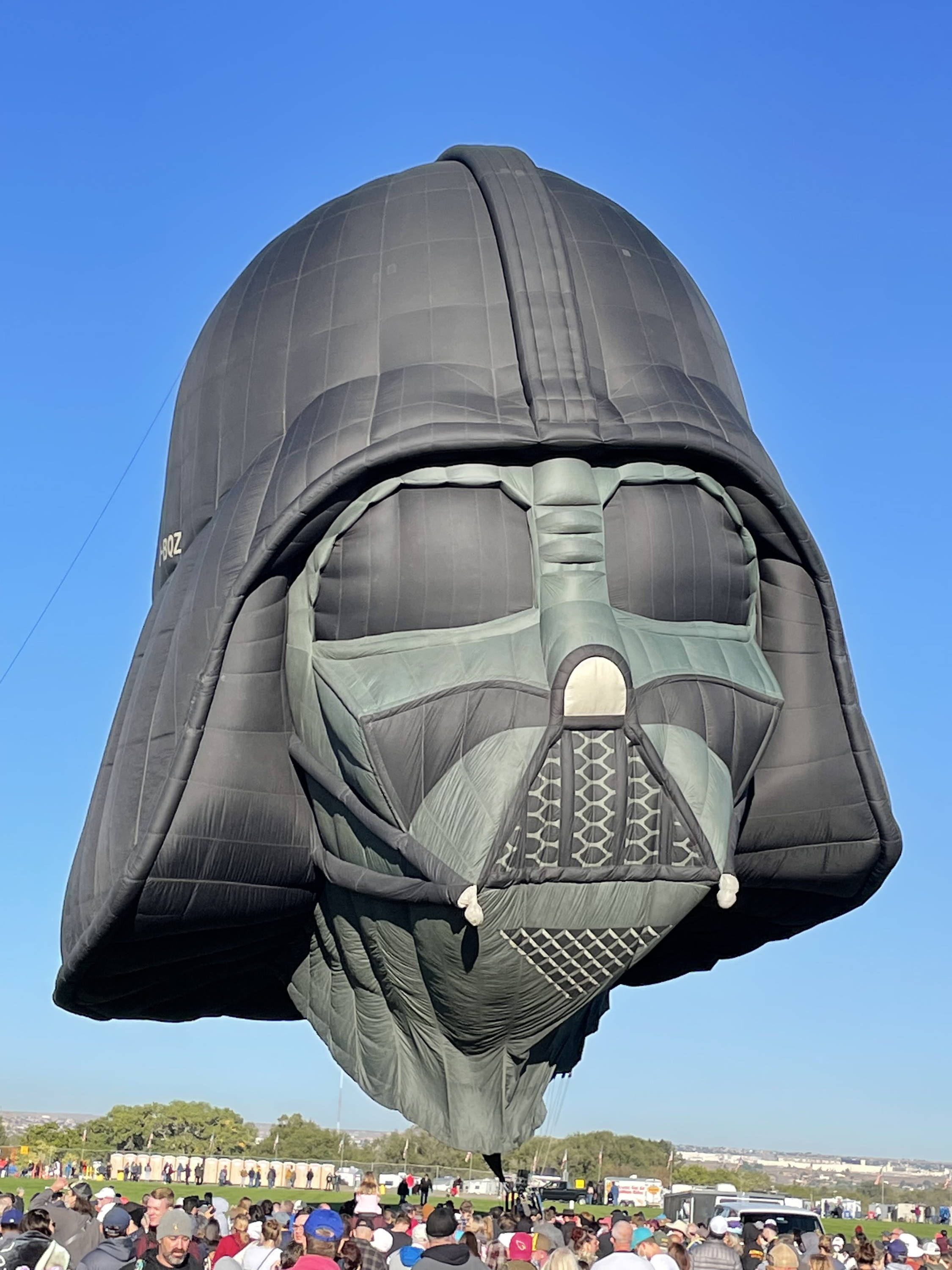 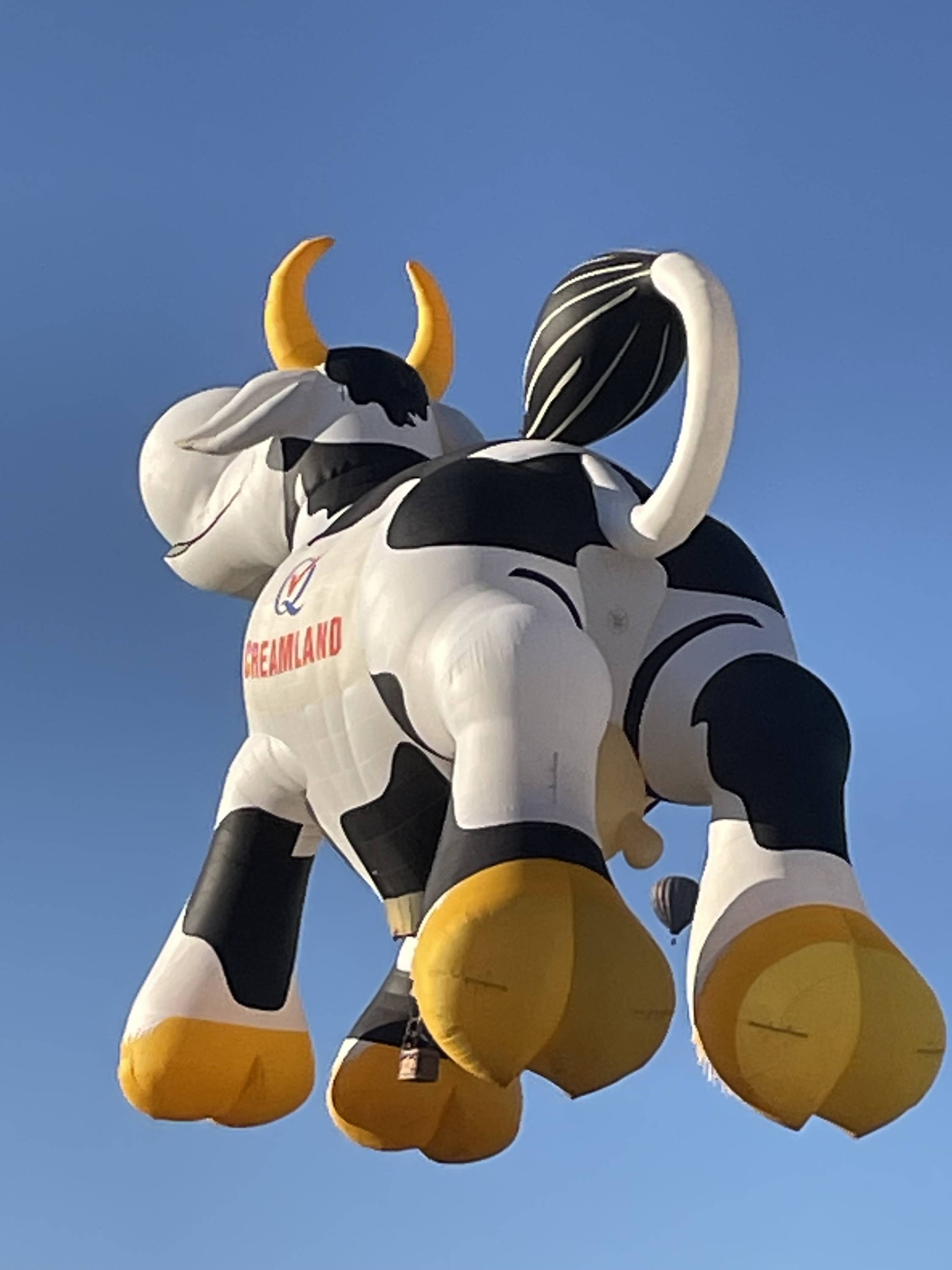 By 9:30 am the ascension was complete, and a few of the later flyers could still be seen drifting over Albuquerque. You may ask, is this really a ‘bucket list’ event? Absolutely, my 25-year-old daughter, my wife, and I were thrilled we made it out for the Fiesta. I am even thinking of returning to be a Zebra or a balloon chaser. It was that much fun.

And by no means was ballooning the only thing going on at the Fiesta. They had a few concerts scheduled, and Chain Saw Carving Exhibitions, Skydiving, Evening Glow of the balloons in the park followed by fireworks. There were events for the balloonists to land closest to a certain spot or drop a marker next to specific points. Oh, and for those who may have wanted an adult beverage or two, there were special adult-only locations where beer, wine, and mixed drinks were served. One other thing, some vendors and the adult beverage areas took cash only!!!! For more information, check the Albuquerque Balloon Fiesta website at balloonfiesta.com.

Finally, we were amazed to see just how many people were required to get the balloons off the ground safely. It was even more stunning considering that everyone, tens of thousands of us, we’re literally walking in, around, and through every nook and cranny of the park while the balloonists and their teams were preparing for their ascent. (NEVER walk on a balloon!!!). A great event, for those 5 to 85. For more information check out the Albuquerque International Balloon Fiesta website at balloonfiesta.com