There is a definite "x" factor with Hollywood stuntmen and women. The people that make "it" happen, but don't have millions of followers. In fact, there is probably a good friend or someone close to you that has it, but is quiet and more comfortable in the background.

Interesting relationships between the people making "it" happen and the actors and actresses that are heralded.

The ultimate "wingman". Watching out for trouble, taking the hard hit and bouncing back up again.

There are a few of these unique relationships that have been behind some of the greatest stunts ever performed. It is this unique group that have really made "the magic" happen who are the inspiration for the Islander Collection.

Laid back, chill, but exudes that "alpha" male pheromone. (Pheromones are chemicals capable of acting like hormones outside the body of the secreting individual, to impact the behavior of the receiving individuals.)

1st question. Perhaps the most iconic stunt ever was from "The Great Escape". Sure, we're all watching Steve McQueen fire up the Triumph TR^ about to make the epic run, but it wasn't him. Who revved that Triumph up and executed that 65-foot leap across the barbed wire fenced border with Switzerland?

Answer: Bud Elkins. Here's the quote describing him, "...a man unaware of his persona and charisma and because of that, all the cooler for it."

2nd Question: Etched in all of us, the classic 1st three movies in the Indiana Jones series. Each time we see Harrison Ford readying himself, the stunt expert is called in. The stunt where he jumps from a horse onto a German tank in Indiana Jones and the Last Crusade was voted one of the Top Ten film stunts of all time. 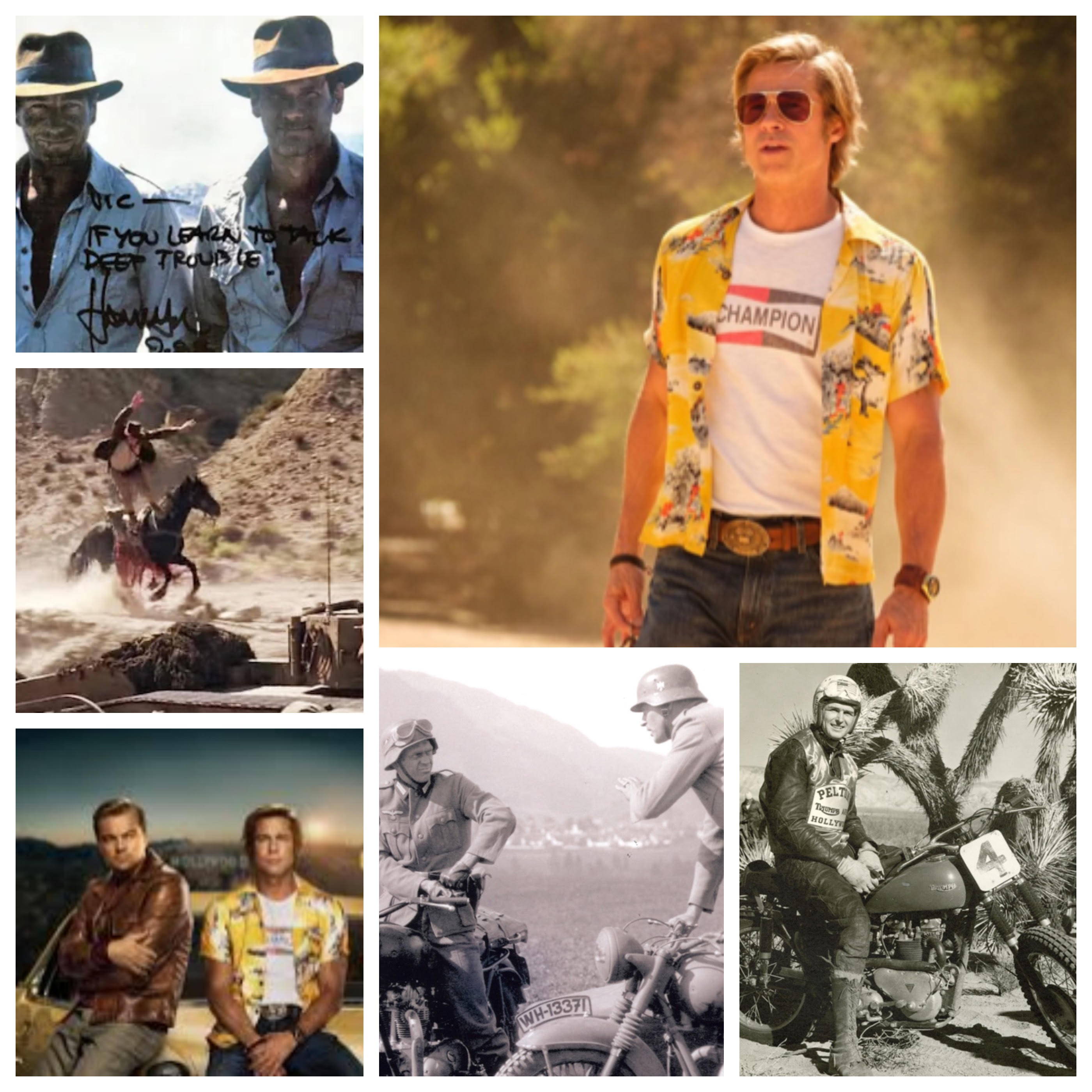 Who is he? Hint: He's married to Wendy Leech, stunt-woman extraordinaire! (...and stunt double in the Indiana Jones series)

Answer: Vic Armstrong. Love this quote from Ford to Armstrong: "If you learn to talk, I'm in deep trouble!"

3rd Question: The focus of "Once Upon a Time in Hollywood," with its multiple storylines, focuses on the relationship between a fading actor and his stunt double. Maybe the stunt double portrayed in this films defines the phrase, "a man's man". Always sitting second fiddle, but carries that "X-factor," which puts him front and center in any rough and tumble situation. The kind of guy you want in that fox hole with you. Who is that now infamous stunt double for Rick Dalton (Leonardo DiCaprio)?

Answer: Cliff Booth. Yep, we know it's played by Brad Pitt. But...you had to get all three stunt-double answers, without "googling" or phoning a friend, to get the win. BTW...this link really captures our point.

It's in honor of those guys and gals that take tumble, dust themselves off and get right back at it that inspired this collection.

Yep...it's about the Pheromones. No words need to be spoke, you see them and you just know.